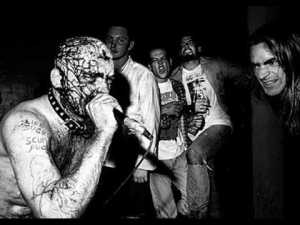 I’ve had my share of anger problems and general jackassery, but I’m a fairly laid-back person most of the time. I try to be polite as much as possible. I open doors for people; I keep my black humor to myself for the most part when I’m not in the bar or at home. I scream and yell in a punk band so I don’t have to when I’m waiting in line at the store.

What I’ve never understood is why being polite, being compassionate, and smiling draws such aggression out of certain people. I saw this behavior a lot in construction: some people would simply hound a person until that person flashed and started yelling or threatening violence. And poof! Acceptance! I don’t think I will ever understand this. Are we no better than a pack of wolves that must continually establish dominance over one another? This ain’t the prison yard, fellas; drop the act. A little basic respect and a smile might keep us from shooting, knifing, strangling, beating, and crucifying each other, at least for a while.

Don’t get me wrong. There are times when compassion fails, and immediate, violent action becomes a necessity, but those times shouldn’t be when we pass one another on the sidewalk, or have to work together for a couple of months. I smile because I hate fighting. I hate fighting because I’ve been in fights. Do me a favor, please. Lighten up, and try to check that need you have—and you know who you are—to dominate everyone you don’t fear.

P.S. I didn’t take the above picture—I stole it right off the Internet. I hope I don’t offend the photographer, and I will gladly remove it if asked to do so.

Jeff is a carpenter and freelance writer born and raised in the Reno area. END_OF_DOCUMENT_TOKEN_TO_BE_REPLACED
This entry was posted on Tuesday, October 22nd, 2013 at 6:17 pm and posted in Uncategorized. You can follow any responses to this entry through the RSS 2.0 feed.
« Today
What Would Jesus Do? »

This site uses Akismet to reduce spam. Learn how your comment data is processed.