Yesterday, while trapping Chihuahuas for snake food, I was bitten on my right bird finger. While Chihuahuas appear to be no more than harmless, miserable wretches, they are actually one of the few creatures engineered by Satan himself, and as such possess a venomous bite. While I do appreciate the general enlargement and discoloring of my favorite finger, I did suffer other complications from the wound: I scared the angel filling out of my youngest son.

I brought both sons along on this particular expedition, as both have shown a keen interest in and natural ability for raising champion rattlesnakes for fighting. Naturally, I only wanted them to observe the Chihuahua hunting (a rattlesnake’s favorite food, by the way) due to the danger involved, so they remained in the truck and paid no attention to me. After limited success, I returned to the vehicle and expressed my anger at having been dumb enough to receive a bite from such an inefficient organism.

Now, I am in the habit of telling my kids the truth (except they believe there is a Santa Claus and that caramel comes from the humps of camels), so I launched into an explanation of why puncture wounds should be treated in the opposite manner in which I treated mine, and told them I hoped it wouldn’t get infected. As a helpful note, I added that an untreated puncture wound could kill a person. A kind staph infection from a splinter buried in my hand once allowed me to experience this directly. Well, I didn’t die, clearly, but you get the idea.

Have you ever said something and then wished you could give a piece of your ear to unsay it? My youngest son immediately began fretting over my imminent death. Despite my attempts to explain the wonders and availability of antibiotics, he grew increasingly distraught. Great, I thought, now on top of being poisoned by the devil’s best friend, I have let slip too much reality into the innocent realm of my son’s mind—where magic protects you from nightmares and Daddy is some kind of perfect demi-god. The world will kick him in the balls soon enough; is there any reason I should do it first?

I arrived home and attempted to put two children to bed, one crabby because it was late, and the other wailing because he’s going to lose a parent. For a moment I wondered if there wasn’t a touch of manipulation involved, but if there was, then I will be able to retire in the near future on his acting scraps. I told bad jokes in worse voices, pretended to eat his brains, tickled him—the usual tricks—but to no avail. At last I resigned to letting him stay up late and watch some beloved Lego movie. Television is a fantastic brain number, so he was able to relax and fall asleep, allowing me to enjoy the high part of that day: feeding time. 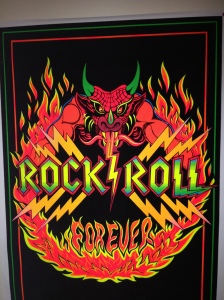 Who would win in a fight between a samurai and a hippy? I suppose, as with the question of God’s existence, we can never truly know the answer. Why would I even propose such a conflict, you ask? Let me explain.

This year I started teaching jujitsu to my youngest son, who just turned five. Jujitsu, unlike watching too many cage fights might have you believe, is a fairly brutal martial art—one employed by the samurai, who were a fairly brutal lot. But polite too, oh they were considerate. I’ve read that before a battle they would burn incense inside their helmets so that—should their heads be taken in battle—they would smell nice for whomever ended up with those gruesome treasures. I guess they do have something in common with hippies: the love of incense. As any jujitsuka can attest, Japanese martial arts are studied in a rigidly formal manner (this formality varies from school to school, I’ll admit), a formality that I rarely encounter in my own American culture. Anyway, I feel it’s important to subject my son to this, and ask him, for an hour a week, to put aside his childishness (luckily he doesn’t know I can’t put aside mine).

The last class went particularly well: he learned to stand in a painful, leg-burning manner, to keep his GD tongue in his mouth, and to roll, slap, kiai, get up and repeat quickly all while I bark at him. I am far harder on him than I am on any other student. And as if the general sense of well-being that studying combat brings wasn’t reward enough, I buy him a donut if he listens and trains hard. Pretty much a win-win situation, I’d say.

We finish class, he devours said donut, and I stop at Reno’s finest head shop on the way home to pick up some incense to burn in my helmet next week. Inside, my boy and I discuss whether he has enough money saved to buy a sweet black light poster (that happened to coincide with my own religious and musical beliefs), and he doesn’t, but I say I’ll take all he owns and he can owe me. Cool. I’m proud of my boy: he’s falling out of tomoe nage, sitting seiza, meditating, and learning firsthand how Capitalism works all before noon.

We head for the register and my son sees the glassware gleaming from behind a beaded curtain, and like a seasoned stoner he beelines toward the shiny stuff. I can hardly blame the kid, right?

“Don’t go in there,” I say. When I’m in Reno’s finest head shop, I obey the rules. Out of respect, of course, not out of love for non-Japanese rules.

“It’s okay,” says the aging blonde behind the counter.

“He needs to do what I tell him,” I respond as politely as possible. He is my kid after all.

“Well, you know, they like see all that bling and they’re like ‘wow’”, she says, holding her hands up like two star fish and fixing her popping-balloon eyes on me. “The more energy you give it, man, the more they fixate on it.”

Now, I pride myself on striving to not be a complete asshole, so I smile, pay, and leave. I can’t combat stupidity and disregard for basic respect wherever I find it: I’d never get back from 7-Eleven (by the way, we drive on the right side of the road in America, even if you have a Slurpee in your crotch). But what I might have said to her was, “Shut up, hippy!” Does she even have kids? I doubt it. If she did she would probably know better than to tell me how to raise mine. If I don’t want my kid in the bong room, he doesn’t get to go in there, no matter how cool you are for flying in the face of house rules. Way to stick it to the man! And don’t tell me to mellow out because I won’t. I can’t; I’ve tried. A lot.

At least my five-year-old received an important takeaway from this affair: they probably play shitty music in Heaven.

While I’ve done much experimentation, I am no scientist. Because I lack this particular deficiency, I listen to my heart. I can feel Dawkins glaring at me from the pages of The God Delusion as I type this, but yesterday, after professing myself an atheist, I had some experiences that yanked me back toward agnosticism. If you’re guided strictly by cold reason, go ahead and stop reading.

When I’m not hosting rattlesnake fights, I like to watch movies in my free time. Last night, I watched a film in which two men—one of whom is a naked, born-again Christian—smoke “dank” and argue the existence of God. Well, this is strange, I thought, I was just rambling about this myself. Keep in mind, one of the sets in this movie is a long, downhill street, presumably in L.A. So fast forward a few hours, and I am watching a second movie (I never finished the first one—despite the drug use, it wasn’t that good). A friend of mine who has recently had a series of genuine, Christian spiritual experiences calls me and says he read my first post. As he is talking, characters in the second movie walk down the same street that was in the first movie. Wow, I think. I felt like somebody was trying to tell me something: it’s not every day I am bombarded with these questions from the entertainment medium I’ve chosen. It’s odd, at least, that these phenomena occur on the very day when I proclaim from the mountain top that I just plain don’t believe the hype.

A bit of a stretch, right? “So what?” ask the wielders of fierce logic. Well, there’s more. Yesterday I also visited some friends and we discussed DMT and meditation experiences. This was not all that uncommon, but it did remind me that I’ve seen and felt things that, while not proving the existence of God, did make me want to hold out on declaring with near certainty that there isn’t one. Kooky, I suppose, but there it is.

So while Dawkins continues to make a great argument against the existence of God, I continue to have certain experiences that render me unable to fully embrace his stance. I guess I’ll have to remain here, perched on the fence as usual, arguing with both sides to pass the time.

I might be an atheist. This is actually a bit of a surprise to me—something I’ve only recently come to admit. Again. A friend of mine loaned me Richard Dawkins’s The God Delusion, and, well, the dude makes a lot of sense (Dawkins, I mean).

When I was a sprout (an angry, bitter sprout), I detested religion, especially Christianity, and thought I should combat it wherever it reared its blue-eyed and blond, bleeding, thorn-crowned head. Atheism was a good fit—it was the weapon of choice for angering Christians and a great way to break the ice for spirited (no pun intended) conversation: “Hey. Do you believe in God?” Admittedly, my love of conflict and preference for discussing religion and politics has somewhat dimmed, yet I am still intrigued with this whole God thing.

I love Dawkins’s wry, biting voice, yet as he presents his argument, I find the Devil’s Advocate within me wanting to disagree. Problem is: I can’t. He makes too much Goddamned Sense (excuse the capitals, but these are Lofty Topics, are they not?) Here I am, a mystical agnostic Taoist with Dionysian tendencies, coming to realize I may be, by Dawkins’s definition, just a plain old atheist. Now what am I going to talk about at the bar? I’m not even a hundred pages in and I’m already losing grasp of who I thought I was. I’m fairly certain most of what I believe is illusion anyway, so it’s actually not all that disheartening. You have to roll with those reality punches, you know?

I have wondered, on occasion, what it would be like if that metaphorical concept in the bible—Hell—was literal. I die and am dragged off Shakespeare’s “stage”, Ghost-style, kicking and screaming apologies to a Trinity who just sneer(s) and turn(s) to me a blind ear. Too late now. Boy, was I wrong, I think as I plunge into searing darkness. What’s that? Wailing? Gnashing of teeth? I guess I won’t have anybody but myself to blame. Clearly, it’s not like no one never tried to ever warn me.